Going Back for Close Reading

Using word clouds and looking at relative word frequency trends are just two methods out of the tool box of distant reading.  Distant reading is taking a corpus of works, in this case the Gen Con programs, and using technology to ask some broad questions.  It's a great way to start research and identify questions, but close reading is almost always necessary to see what is really going on.  Close reading is likely what you already do when working with a text: reading something line by line and interpreting that small section as you take it in. Distant reading and close reading work well together for examining a large set of texts to help you quickly identify areas and questions of interest. This allows you to evaluate the data in different ways. 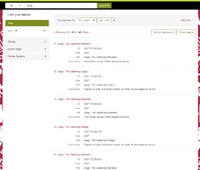 Magic: The Gathering events for 2007

Event view of a 2007 Magic: The Gathering event

Let's take a look at the Dungeons & Dragons and Magic: The Gathering events of 2007 as an example.  On the left, you can see there are 140 events from 2007 that have the word magic in the game system field.  Not all of them are Magic: The Gathering events, but the majority of them are.  If we start to look at the record for each of these events, as you can see in the other image on the left here, you notice one important bit of information in the number of players.  This particular event, and most of the others for Magic, have a maximum player limit of 64.  How many Dungeons & Dragons games do you think have a player limit that high in 2007?  This is important because it shows that even though the number of events between these two game system were relatively close, Magic may be reaching a larger number of individual people.  What do you think provides more impact, having a larger number of events or a larger number of total players? 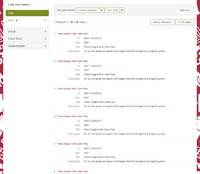 Events in 2007 for the term dungeons & dragons 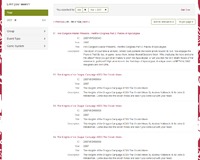 On the right we can see some of the events in 2007 under the search terms dungeons & dragons and d&d.  The first thing to notice is that many of these games are not actually for Dungeons & Dragons the roleplaying game, but either for a game themed around Dungeons & Dragons called Three Dragon Ante, or in the case of the search term d&d, for the D&D Miniatures Game.  These two systems are at least inspired by Dungeons & Dragons, but would you count them as the same as those games of D&D from 1984?  This question is not as straightforward as it sounds, as maybe you are more interested in the penetration of the Dungeons & Dragons brand at Gen Con rather than just the roleplaying game itself.  Regardless, these are issues you must consider when conducting this type of research. 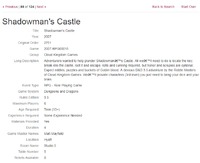 If we take a closer look at some of these D&D events, we see that they have far fewer players on average than the Magic: The Gathering events.  "D&D for Beginners," which occurs several times, has seats for 12.  Other games of D&D, like the one shown on the left here titled "Shadowman's Castle," tend to average in at 6 players per game.  In 2007, there were a total of 173 games listed as either dungeons & dragons or d&d in their game system field, though a fair number of these were not of Dungeons & Dragons the roleplaying game.  That same year there were 140 games listed as magic, though again, not all of them were of Magic: The Gathering.  For argument's sake, let's pretend all of those events listed for d&d and magic were actually for those games.  With that in mind, which do you think had more impact at the convention?  The 173 listed Dungeons & Dragons games with an average seating of 9 players, or the 140 games of Magic: The Gathering with an average seating of 64 players?

← What about Trends?
Tying it all Together →
Going Back for Close Reading