Word clouds, as you saw on How do we Know All This?, are but one visualization tool you can use to help understand a data set like the Gen Con event listings.  They have their uses, but cannot tell us everything.  For instance, if you were to read the Gen Con forums or facebook group you may notice several people discussing how much more cosplay there has been in recent years at the convention.  Is there a way we can see if this observation pans out through the event listings?  To test this, let's take a look at word trends.

Trends of the term cosplay and costum*

On the right here we are looking at the relative frequency of the terms cosplay (pink) and costum* (purple) in the title field of the event data.  By adding the asterisk at the end of costum*, we include in our search all words that begin with 'costum,' such as costume, costuming, costumer, etc.  Showing the likelihood that a given word will appear out of a million words, the relative frequency helps us to see how popular a term is in any given year.  Looking at 2016, for example, you can see that cosplay has a relative frequency of .0004. This means that cosplay is expected to appear approximately 400 times out of every 1,000,000 words.  That may not seem like a lot, but you have to think about all of the words used to compose the titles of these events.  We also are not looking at how cosplay or costum* compare to other terms in the database, but the general trend of how these terms rise or fall over time.  One thing is clear, the term cosplay definitely begins to rise post-2010, giving some credit to the observation that cosplay has become an increasingly popular activity at Gen Con.  There are some anomalies in this trend graph as well.  What is going on with those spikes in 1984 and 1994 with costum*?  What other questions does this trend graph raise for you? 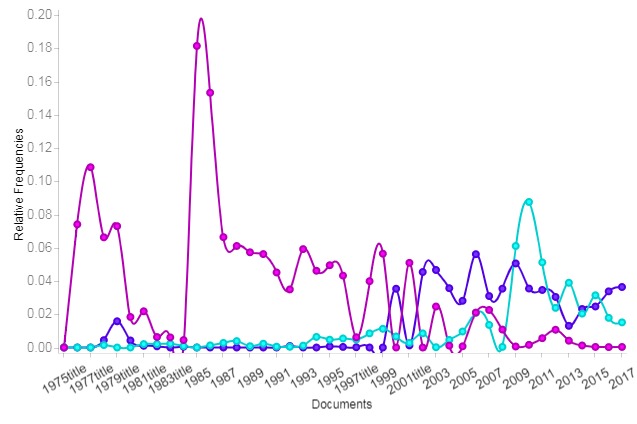 Trends in Dungeons & Dragons, D&D and Magic through the Game System field

Let's take a look at another trend.  It has been surmised that Dungeons and Dragons and Magic: The Gathering have both been pivital for Gen Con.  Just how true is this?  Have either of them tapered off over time, and if so, why?  On the left here is another trend visualization.  The terms d&d and dungeons & dragons are in pink and purple, respectively, and the term magic is in light blue.

One of the first things to notice here is the relative scale we are looking at.  When we examined cosplay and costum*, the relative frequency ranged between 0.001 and 0.004.  For d&d and magic we are looking at a scale of 0.01 and 0.20.  That's a huge difference!  If we look at 1984, for example, that means there was an 18% chance that any given game run that year was Dungeons & Dragons.  Can you imagine going to Gen Con today and having nearly one-fifth of the convention playing the same game system all weekend?  That said, Dungeons & Dragons is still popular, with 4% of the events run in 2017 being some flavor of D&D.  Considering there are over 19,000 events in 2017 and there were only 663 in 1984 that is still a lot of Dungeons & Dragons played!

What about Magic: The Gathering?  The game was released in 1993 and became quite popular quickly.  As popular as Magic has been, the game doesn't seem to have eclipsed Dungeons & Dragons in sheer number of events except in a handful of years; 2007-2011, 2013 and 2015.  That said, Magic is still hugely popular, just remember the scale we are looking at here.  Could there possibly be other reasons why there are fewer Magic events than D&D events?  We'll have to turn to another textual analysis technique to see.

← How Do We Know All of This?
Going Back for Close Reading →
What about Trends?