The Women and Men that Lead Games

It is no secret that the number of women visibly participating in both tabletop and video games has been increasing in recent years.  Anyone who has attended gaming conventions or paid attention to online content creators in the near past can see the shift from faces belonging largely to white males to those of other genders and ethnicities.  Gen Con this year, 2018, is bringing Anita Sarkeesian as a Guest of Honor to the convention this year.  Sarkeesian, if you are not familiar, is a feminist media critic who is best known for her Feminist Frequency project and feminist critique of video games that marked her as a target for harrassment and disruption by Gamer Gate.  Through this choice it appears that Gen Con wishes to send a message about the convention, that there are issues in gaming and that inequality need to be addressed.  But why is Gen Con doing this now?  We can delve into the event data from the programs to help find an answer.

Before we look at the data I want to talk a little bit about the method used in this analysis.  The programs do not list who played in the games or who ran them by gender.  What it does list, however, is the names of people who signed up for events as game master.  While not the best indicator of gender, we can cross reference these with the US Census and how people with those names identified themselves.  This is far from perfect, but it does allow us to get an idea of who was running games at Gen Con.  We used the 1990 census for this cross reference and excluded any names that had people identifying as both male and female.  Moreover, the census is not the most reliable tool because as it provides no sense of those identifying as non-binary.  The census also is not very good with non-European names.  Several names listed in the Gen Con programs had to be omitted simply because they did not appear in the census.  Despite these issues, we were able to identify 47,000 seperate names.

Additionally, while this provides us no information of the players of these games, I argue that signifying oneself as the game master is actually a more important indicator.  Running or organizing an event is an indication of leadership that requires a degree of confidence and comfort in the person doing so.  The more welcome an individual feels in an environment the more likely they are going to be able to comfortably volunteer their time for these events.  In many ways, this makes identifying game masters more important than players. 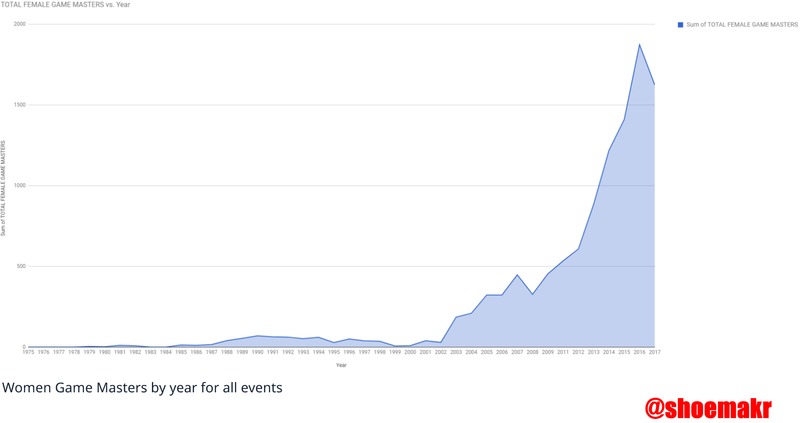 In the graph on the side we can see the growth of women as game masters at Gen Con.  Note that this is based on raw numbers and is not normalized.  Even so, we can see a generally stagnant number of women running events from about 1984 until 2002, followed by a sharp increase nearly every year from 2003 to 2016.  During this period of growth of women game masters, Gen Con did move to Indianapolis.  It also experienced an increase in general attendance.  We need to look at some more data to see if women attending as game masters was increasing solely as a result of attendance gains or perhaps some other cause.

Percentage change in attendance and women game masters by year 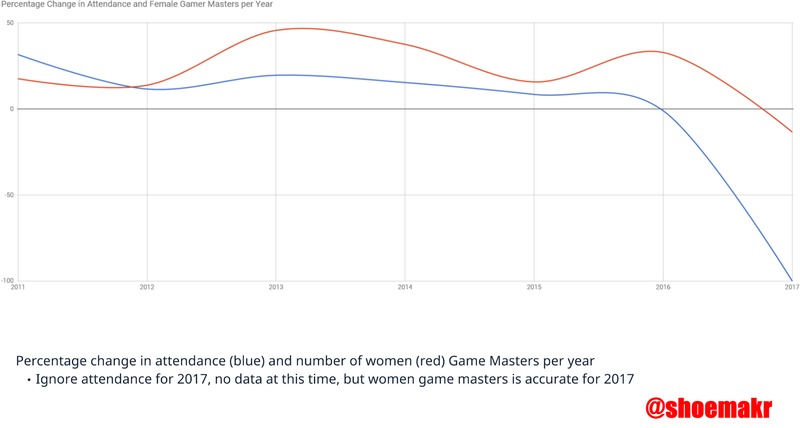 Percentage Change in Women Game Masters by Year 2011 to 2017

If we zoom in and take a look at the years 2011 to 2017 we actually see a rather large disparity between attendance growth and women game masters.  What could be causing this increase, and was this affecting men running events as well? 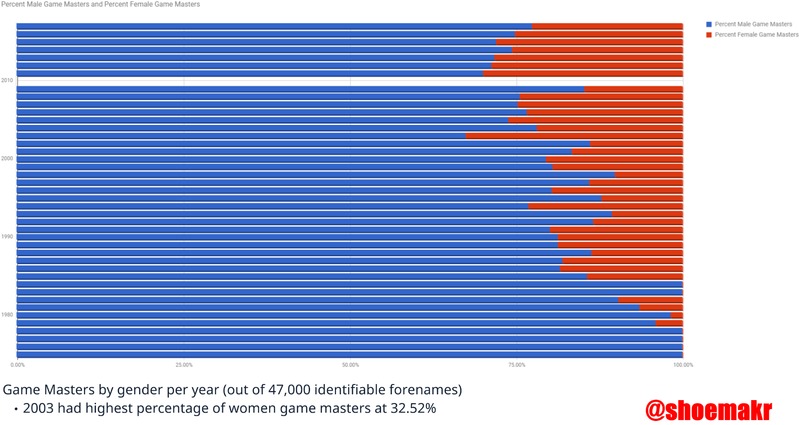 Game masters by gender per year 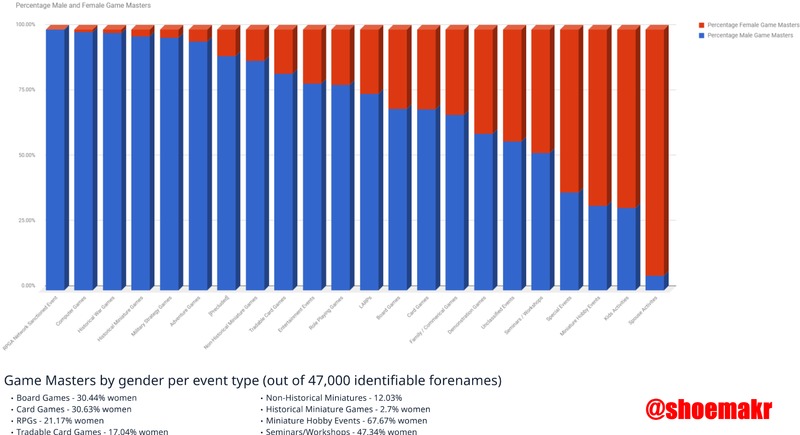 Looking at this data we can see that women are definitely becoming a more prominent presence in Gen Con.  That said, there are still issues that need to be addressed.  For one, it would be good to explore the change in game masters by gender and event type per year rather than in aggregate like I examined here.  This may tell us more about which specific areas have more women game masters and where growth can more easily be encouraged for the future.  It would also be great if there could be parity between men and women running events; not because we want less men running events, but rather to encourage variety and viewpoints by having different genders and ethnicities included in the leadership role of game master.  Finally, to the best of my knowledge Gen Con does not collect its own statistics on game masters or attendees based on gender, but if they did it would be valuable data for taking the pulse of the tabletop gaming world in the United States.

Gen Con has clearly looked at the writing on the wall and seen that gaming, like much of the rest of our society, is fighting to become a more inclusive place where all voices are valued.  Inviting Sarkeesian as a Guest of Honor in 2018 has sent a message that made this clear.  Change is coming, and we want you to know you are welcome here.

The Women and Men that Lead Games