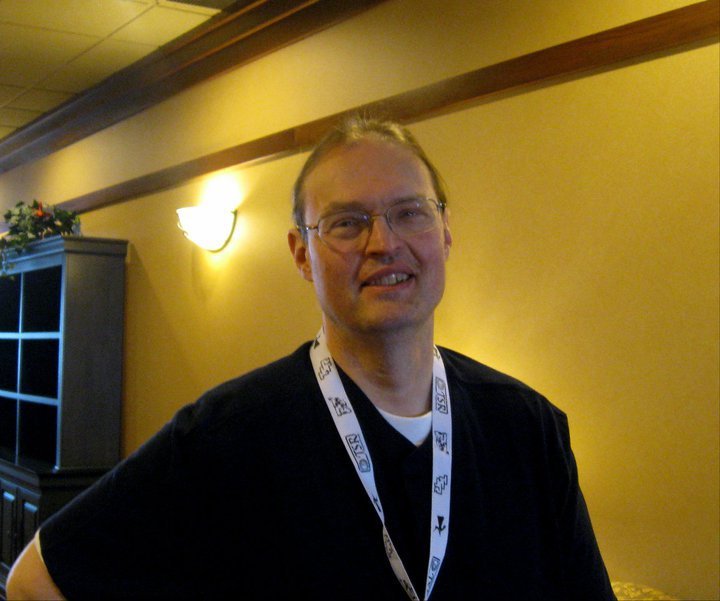 Shoemaker: Please tell me your name and how many Gen Con's you've attended.

I’ve attended more Gen Cons than I care to remember. I began attending when the show was still at Horticultural Hall in Lake Geneva, around 1976. That would have been Gen con VII, I think. I stopped attending a few years ago when the annual trip became too difficult to manage. It’s great to be back for Gen Con 50.

Shoemaker: Do you have a favorite Gen Con, why?

Williams: So many fine memories, so it’s hard to pick one, but here’s a major contender:

Back in 1992 Gen Con and Origins combined for a second time. On the Wednesday before the show, Jean Rabe and I arranged a dinner out for some of the RPGA’s key volunteers. To my surprise and delight, one of the Origins guests, Donald Featherstone tagged along with the group. Now, the late Mr. Featherstone was a giant in historical miniatures gaming, having played a major role in creating the hobby in the UK. I never learned just how this man managed to get entangled with a gaggle or role-players, and I was the only person in the group who had any idea who he was. I planted myself next to him at the table and the pair of us shared a bottle of wine and chatted for a couple of hours. I was in geek heaven.

Shoemaker: Do you have a favorite event, why?

Williams: If you’re talking about a recurring event, it has to be the Saturday morning Dawn Patrol game. Dawn Patrol is a great game anytime, and it was the first event ever run at Gen Con. It’s great that Dawn Patrol’s fans have kept up the tradition. This year, the Dawn Patrol Society is opening show once again (on Thursday morning) and they’re planning a gorgeous event.

Shoemaker: Is there anything you miss about Gen Con that isn't done in the more recent shows, why?

Williams: Gen Con seems to have done a great job of keeping up its best traditions. The only things I’ve missed in more recent shows remain connected with the show’s old home in Milwaukee. Things like strolling down Old World Third Street or wandering toward to river to mingle with the crowd at whatever street festival was haring the city with Gen Con that year.

Shoemaker: What kinds of games did/do you tend to play and/or run?

Williams: I play Dawn Patrol whenever I can. I throw together a D&D game now and then. My wife, Penny, runs a D&D group online, and she and I regularly conspire together to keep things interesting.

At Gary Con this past March, I grabbed a seat in one of Jim Ward’s Metamorphosis Alpha games. I died ignominiously, of course.

Shoemaker: You directed Gen Con from 1980-83, what was it like running the show for those years?

Williams: Mostly it was like having a very sick friend or spouse. Everyone I met asked how things were going. More seriously, the biggest challenge during those years was keeping pace with the show’s growth and trying to systems into place that would ease future growing pains.

Shoemaker: Were there any particular directions you wanted to steer Gen Con towards while you were director?

Williams: My biggest goal during those years was introducing things for people to do when they didn’t have a scheduled event to play. Things that people could just drop in on for a few minutes or hours. Gen Con’s current media track and vast exhibit hall fill that need nicely these days.

Shoemaker: You later worked with the RPGA, which had several tournaments run at Gen Con.  Can you tell me how those went and were run?

Williams: Not just several events, but the biggest tracks of gaming at the show. In those years, the go-to game system was the AD&D 2nd edition game and the emphasis was on role-playing. We created detailed characters and used the scenarios as backdrops for interactions between the characters. This year, we’re bringing that style of event back through a new gathering of old role-playing grognards, Paragons of the Past.

Shoemaker: How has playing D&D in organized play, like the RPGA, changed over the years at conventions like Gen Con?

Williams: During my tenure at the RPGA, Jean Rabe and I launched the Living City events. These were campaign style events in which you brought your own characters. That style of play pretty quickly took over. People love to create their own characters and watch them develop over time.

Shoemaker: What was it like launching 3rd edition D&D at Gen Con?  How did convention attendees react?

Williams: It was a total head rush. The crowd at the event where we announced the new edition was huge. The following year, when people had the new Player’s Handbook in their hands, things were just wild.

Shoemaker: What have been some (other) major transitions of Gen Con you have noticed?

Williams: Gen Con has grown from a handful of gamers getting together to play for a little while (which, in its time, was a pretty big deal) to a massive media show. Attending Gen Con has become like going to Los Vegas, except that, thanks to social media, what happens at Gen Con does not always stay at Gen Con.

Shoemaker: Any thoughts on how you would like Gen Con to progress in the future?

Williams: I think the show is on a pretty healthy track. Gaming touches many aspects of life and the staff is managing that pretty well, from handling increasing crossovers between games and other sorts of entertainment to making gaming a force for positive social change.